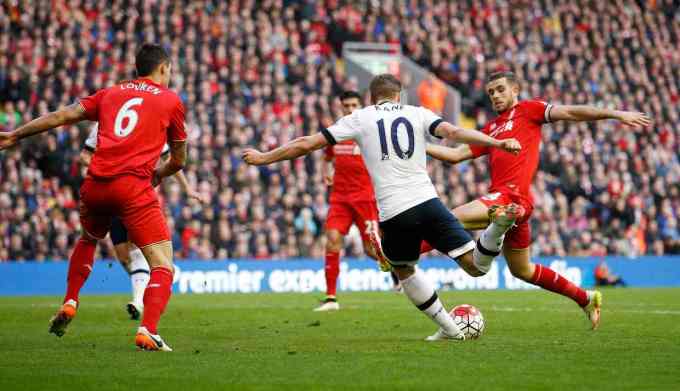 Pochettino’s men drew one all with Liverpool today at Anfield in a match that many had billed as a must win fixture as Spurs challenge for the league title. However, the lads battled so very hard for the point and put in maximum effort as they beseeched a victory. Although a draw was all the 11 men of Tottenham could manage, as it takes them one point closer to league leaders Leicester, who face Southampton tomorrow afternoon in a game that every Spurs fan will be rooting for the south coast club. Both teams started the first 25 minutes of the match with a high attacking tempo however, the first chance for either side came on 26 minutes. After Harry Kane was found in space, the centre forward spurred forward into the penalty area before unleashing a low shot, which flew narrowly wide of the left post. A mere ten minutes after Tottenham’s best chance of the game, Liverpool created their own after Sturridge received the ball in the Tottenham penalty area, and the England international struck the ball early as his effort was powered straight at Lloris who thwarted the ball comfortably wide. Liverpool again went close two minutes later, this time through Adam Lallana who went for goal after receiving a pass inside the box and Lallana’s effort almost dumbfounded the Frenchman. However, Lloris got down to make a fine save as he palmed the ball away from the danger zone.

It was a disastrous start to the second half for Spurs as they were carved open on 51 minutes after Daniel Sturridge found the unmarked Philippe Coutinho who stroked the ball into the bottom right hand corner of the net, 1-0 to Liverpool! Son-Heung Min almost levelled for the Lillywhites on 58 minutes, after receiving a wonderful pass from Dier as the South Korea international volleyed agonisingly wide of Simon Mignolet’s left post. However, Spurs finally got level five minutes after Son’s chance after Harry Kane scored a spectacular goal. Kane received a pass from Eriksen after he raced to get to the ball before it crossed the byline and passed to Kane from inside the box who swivelled and from an extremely acute angle fired the ball fantastically beyond the reach of Mignolet and into bottom right hand corner of the net, Kane had no right to score from there, 1-1 the score. Christian Eriksen almost put the Spurs fans into delirium, as three minutes later the Dane was in space and hit a low and hard shot which forced Mignolet into making a fine save, as the Belgian stopped it from going in past the left post.

The game became almost an end to end encounter in the following minutes after Coutinho almost put Liverpool back in to the lead on 70 minutes as he fired an effort from a tight angle, the Brazilian saw his shot fly a whisker wide of Hugo Lloris’s right post. Furthermore, the Brazilian almost won the game for the Merseyside club on 85 minutes, after Coutinho got on the end of a cross and the Liverpool man made some space before firing just wide of the left post. The final score at Anfield, Tottenham Hotspur 1-1 Liverpool in a game that showcased our pedigree and tenacity on the field. However, at the end one can fairly summarise with a degree of disappointment that a draw was the fair result, as for now all Spurs eyes are cast on a Leicester slip up tomorrow afternoon at the King Power stadium as they host Leicester. COYS⚽️

Additional notes: Harry Kane was one of our finest performers on the field of play this afternoon as he showed exactly why he is the best striker in England as he netted his 22nd of the league campaign, although despite his wonderful goal Kane was again omnipresent on the pitch as he pressurised the opposition with great effectiveness and the Tottenham mans eagerness to defend, attack and score was one of the key reasons why we got a point today. In addition Eric Dier and Mousa Dembele bossed the midfield with their great tenacity and defensive instinct also the partnership of Kevin Wimmer and Toby Alderweireld again produced another superb defensive display. On the other hand Klopp’s men marked Alli throughout as he was unable despite his best efforts to imprint himself on the game. Another key performer was our captain Hugo Lloris who pulled of a variety of excellent saves, six in total as he again helped us keep our point. 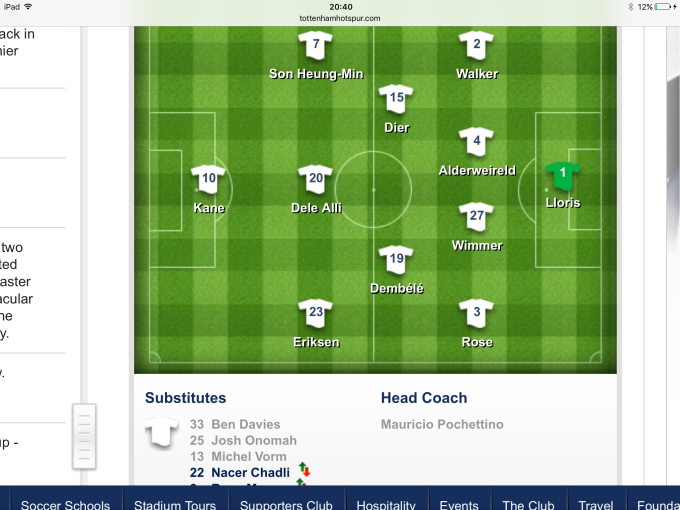 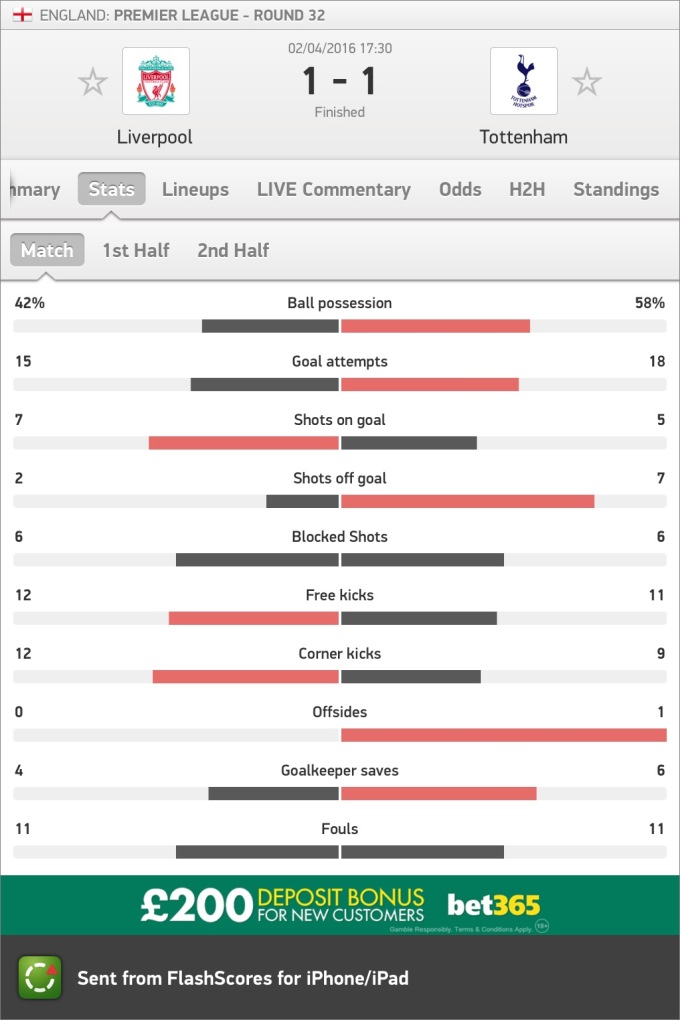