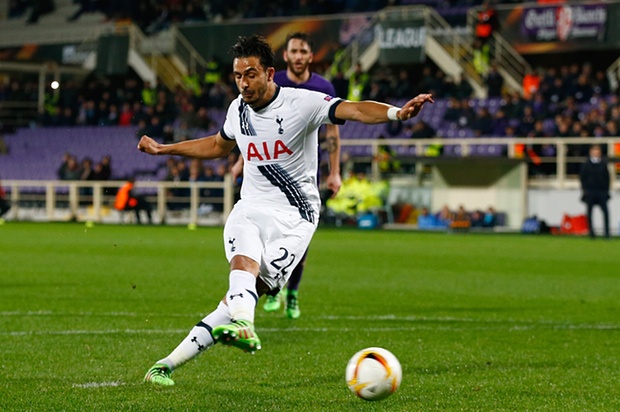 Match review: A confident performance from the Spurs players this evening resulted in a one all draw, with the lilywhites taking the imperative away goal back to north London for the second leg next Thursday,in what was a deeply satisfying result for the football club.La viola (Fiorentina) played a steady game and within the first half hour there defensive counter attacking tactics had our lads highly focused as they looked to carve through the rigid defensive line that the Italians held.On the thirty minute mark,controversy arose as Dele Alli launched a little kick in to the back of Nenad Tomović of Fiorentina as the full back lay on the floor as he tried to protect the ball from the pressing Alli as it rolled away for a goal kick.However,the 19-year-olds frustration fortunately wasn’t ajudged to be a sending off as Alli was only given a yellow card. Shortly afterwards Fiorentina almost took the lead,as Zarate peeled away from his marker and hit his shot narrowly wide from the in swinging cross.Thirty seven minutes in a good run from Ben Davies in to the penalty area resulted in a penalty being awarded after the Welshman was fouled.Nacer Chadli took the responsibility on his shoulders and he coolly despatched from the penalty spot 1-0 spurs! Chadli’s sixth goal of the season.Shortly before the half time whistle blew Zarate again went close after his volley narrowly flew over the bar,1-1 at the interval.

We had the ball in the back of the net shortly after the second half had begun,a wonderfully improvised Son header from a free kick,but it was ruled offside by the linesman.As the second half progressed Fiorentina’s chances of scoring depreciated as Alderweireld and Wimmer seemed unstoppable in the defence, yet fortune  was to present itself to Fiorentina.Bernadeschi’s 30 metre pot shot nestled luckily into the top corner of the net after a hefty deflection off our captain Ryan Mason,1-1!After the equaliser the lads looked to settle for the 1-1 draw which would give them the advantage going into the second leg and succeed they did in their mission.However it was not without anxiety as in the 90th minute Fiorentina’s Rodriguez headed agonisingly wide of the post.One all the final score as Spurs put in a very good performance in Tuscany,Alderweired may have remained unnoticed to some,simply because of his rapid efficiency but his superb defending for me makes him man of the match.We go into next weeks return leg at the lane on the front foot.COYS⚽️
Spurs (4-2-3-1): Vorm; Trippier, Alderweireld, Wimmer, Davies; Mason (C), Carroll (Dembele 45); Son (Kane 68), Alli, Eriksen; Chadli (Dier 79). Substitutes (not used): McGee, Rose, Walker, Onomah.